Lanzarote, the northern
and easternmost of the Canary Islands, is situated in the Atlantic Ocean,
115 kilometres off the coast of Africa.

The climate, dry and mild throughout the year, is highly suitable for
all kinds of outdoor sports.

Lanzarote with its extraordinary lunar landscape covers some 813 square
kms. The massive volcanic eruptions in the 1730s lasted for six years
and covered one third of the island in a sea of lava. The so-called
Fire Mountains (Montañas del Fuego) were created in the proximity of
the ill fated village of Timanfaya. Another eruption in 1824 produced
a new volcano “Tinguatón” which spewed molten lava over the southwest
part of the island. The lava fields of Lanzarote, the so-called malpaís
which consist of thick black layers of ash and pebbles are pitted with
a multitude of craters. Despite this volcanic inheritance, the land
is fertile enough to grow crops. In “La Geria” for instance grapevines
have been planted. The grapes produce an superb light white wine with
a characteristic bouquet.

Five thousand hectares of volcanic landscape. The Mountains of Fire
with their three hundred craters, 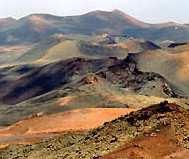 the Valley of Tranquillity and the beaches of black lava are just some
of the sights of this unforgettable place.

Or the Green’s cave,(named after a family who lived there. This
is only one section of the complex network of underground galleries
stretching for over seven kilometres between the volcano La Corona and
the sea. 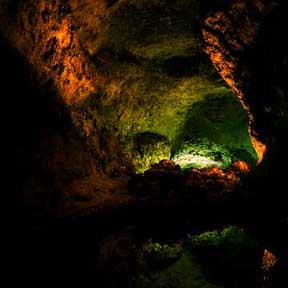 One of the galleries has been turned into a concert hall.

A complex comprising caves, volcanic bubbles and
a subterranean lagoon,

all cleverly and artistically linked up in accordance with Cesar Manrique’s
designs. 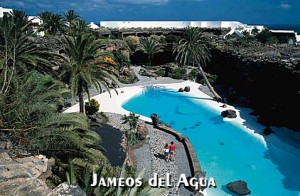 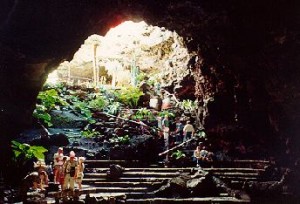 One of the natural grottoes is now a concert hall with perfect acoustics,
while others are used as restaurants and bars.

There is also a museum of vulcanology.

Cut into the sheer cliffs of Fariones Point, the
lookout platform offers views of the north of Lanzarote and the island
of La Graciosa, 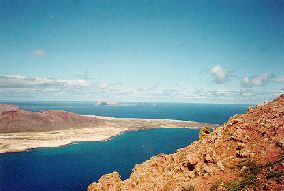 where Tasso sited the garden of Armida.

A 17th-century fortress converted into a Museum of Contemporary
Art. Works by Picasso, Mompo, Miro, Tapies, Millares and others. 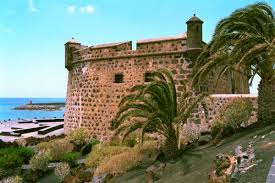 The
restaurant is highly recommended, both for its food and for its views
over Arrecife Harbour.

This garden in Guatiza, in the north of the island, was also designed
by Cesar Manrique, and contains nearly one thousand five hundred species
of cactus and a total of almost ten thousand plants.

Very interesting
as well as beautiful.

Cesar Manrique’s dream come true. It was inaugurated
in 1992, a few months before his death. Those wishing to find out about
the artist and his work – especially painting – should also visit his
house, 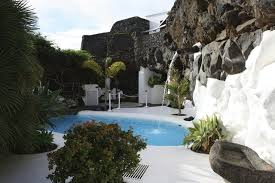 which stands on the black lava of Tahiche. Castle of Guanapay.
At the top of an extinct volcano with the spectacular views of the area.

Book all your Tours through a reputable Company.

One I have used is Last Minute.com