Power FM was re established to broadcast initially online only, but was soon going out over Lanzarote and Fuerteventura. Power On FM now reaches over to Tenerife also. Jules broadcasts his show weekly from 1-3pm, it features great music and local news for Spain and the Canaries, plus daily Birthdays and more.

Jules was offered the opportunity to go over to Buzz FM, broadcasting over Lanzarote and Furteventura,
he started his regular show on Christmas eve 2007,

In 2010 Buzz moved to a floating format so you could get him throughout the day.

Buzz FM has a distinct sound unheard of before in the canaries, providing News on the hour and a more music policy and relevent Chat,
including competitions, Local News for Spain and the Canaries, Also Weather updates Celebrity gossip and a lot more.

2005-2007
Jules went to work with Power FM and for the first time in the history of British Radio Power FM began Broadcasting over Tenerife and Neigbouring Islands plus Lanzarote and Fuerteventura.

A year on and Power FM was broadcasting throughout the Canary Islands and was in fact the biggest English Radio Network in Spain.

Jules continued working with Power until mid 2007, unfortunately due to engineering difficulties he left. Not long after Power went off the air.

Roger Deign, Owner and Headmaster of the Collegio Hispano Brittanico, the local british school in Puerto Del Carmen.rang Dick Knowles, Jules Friend and Colleague on Litoral and asked him to set up a new 24 hour Radio Station, Jules was asked to come onboard to set the project up and two years later UK AWAY FM was born.

British Radio was born again Broadcasting 24 hours a day. Jules hosted the Breakfast show from 8am and UK Away went through till 5pm then till 8pm, and finally through to 11pm before the Overnight Service took over, Jules and Dick built up a Presenter team of local People and the Radio went from strength to strength

Jules continued working with UK Away for 3 years as Studio Manager and Presenter,

Jules took on his first full time slot with the then Radio Volcan (affiliated with Cadena Ser National Radio) in 1990 with his friends and  colleagues Eric Corrie  and Anthony Harrison.

Jules in the Afternoon continued on Volcan and then upstairs to the new Radio Litoral for nearly Ten Years.  British Radio in the early 90s was in its infancy, the Quality was questionable, the Equipment modest but the response from the Expats was a unanimous thumbs up. Radio Volcan then Litoral went from an hour a day finally to 3, a turning point for the Team. Overnight it all went wrong, after nearly 10 years of broadcasting Jules and the team were told they could not do their shows anymore, it seemed that was the end for the thousands of loyal listeners throughout Lanzarote and Fuerteventua.

He then went on to Hospital Radio, broadcasting from a portacabin beside the Hospital before moving to Lanzarote. 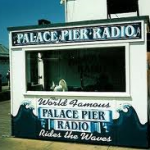 Jules Radio work started in 1980 when he broadcast some shows on Palace Pier Radio in Brighton.